EdgeMultiplay uses a websocket server to communicate GameFlowEvents & GamePlayEvents with the players(connections) and a UDP server to forward GamePlayEvents between players (such as positions and/or rotations).

The server have two main functions:

The server is considered to be a Lobby, the lobby have rooms, players(connections) are assigned to rooms based on room vacancy only.

A Room is where the players are grouped together once the game starts players in the room can start forwarding messages between each other. 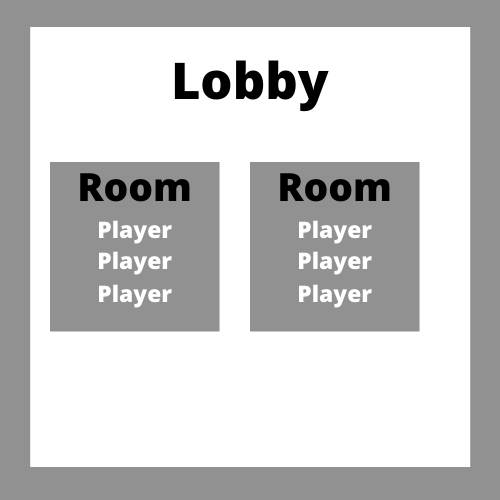 There is 9 standard events on the server that represent the Game State before the GamePlay , see full list of GameFlowEvents in the Event class.

GameStartEvent : A game start event is sent once the number of room members reaches the maximum players per room.

RoomJoinEvent : Room Join Event is sent from the server to the player once a JoinRoom request succeed.

RoomCreatedEvent : Room Created Event is sent from the server to the player once a CreateRoom request succeed.

AvailableRoomsListEvent : An event that contains the list of available rooms on the lobby, This is the response of EdgeManager.GetAvailableRooms().

RoomsListEvent : An Event containing the list of rooms on the lobby, This is the response of EdgeManager.GetRooms().

There is a single GamePlayEvent, that is a wrapper for data to be trasnferred between players.